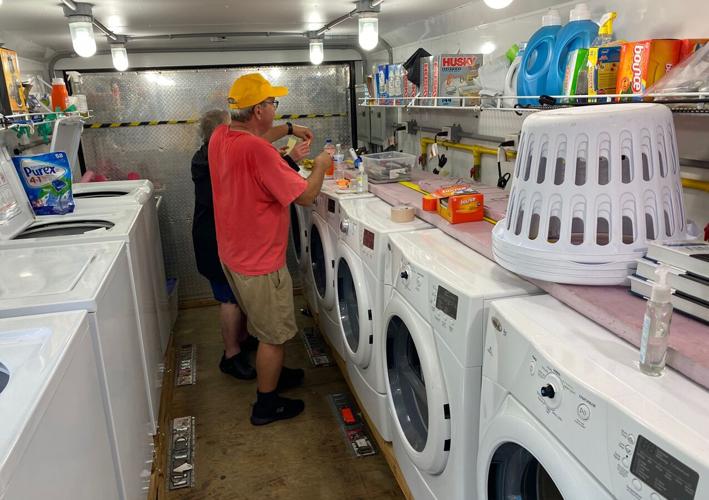 Kentucky Baptist Disaster Relief laundry units have been put to the test this week in Hazard with hundreds of loads being washed and dried. 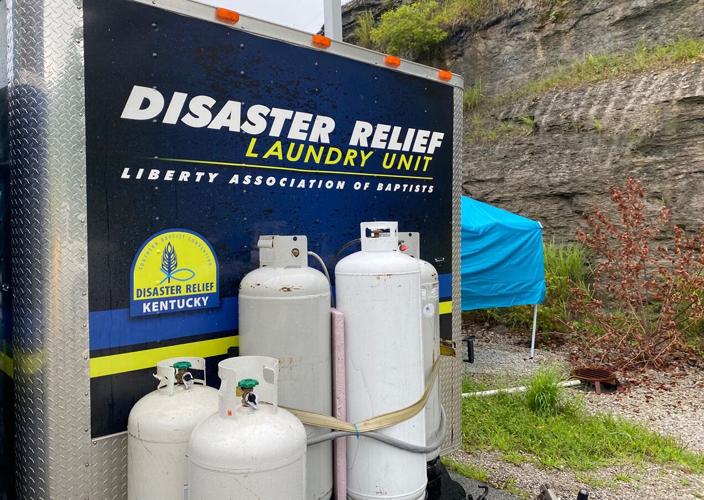 It takes $100 a day of fuel to run the KYDR laundry units. 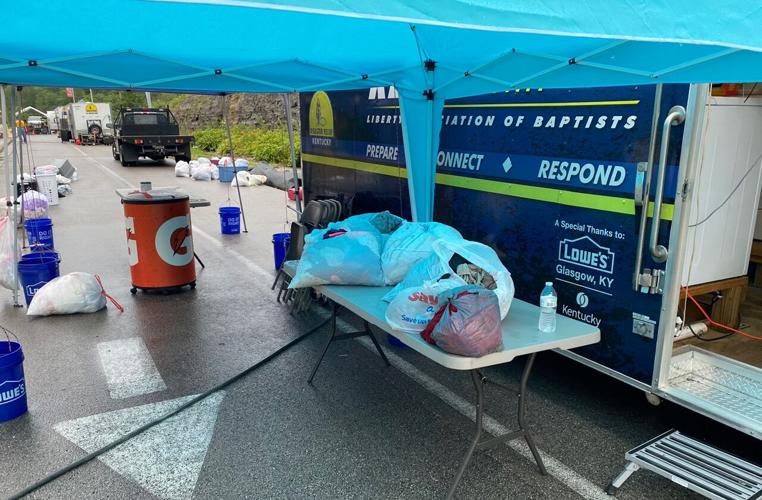 People have dropped off bags of clothes that are cleaned, dried and folded by volunteers in the Kentucky Baptist Disaster Relief laundry units in Hazard.

HAZARD, Ky. (KT) – Of all the items donated to the flood survivors in eastern Kentucky, officials have asked that clothes not be included.

The clothes are needed but there’s nowhere to put them. Clothes soaked in flood water or covered in mud have to be cleaned and washers and dryers aren’t available to those affected.

That’s where the Kentucky Baptist Disaster Relief’s laundry units have been a blessing. They wash, dry and fold clothes that are mud-covered or have been soaked by flooding. The clothes come mud-stained and some still dripping wet in whatever the flood survivors can carry. They leave cleaned and neatly folded for pickup.

Fifteen KYDR volunteers are manning the laundry units and the shower units at Perry Elementary School in Hazard since Aug. 1. They are moving to a church location in the area so the school can began preparing the building for students, said Carolyn Gray, who is the Blue Hat in charge of the laundry and shower units. Kentucky’s team will be partnering with Mississippi, one of 10 state conventions who have sent DR teams to serve in eastern Kentucky.

She said many have come with dirty clothes packed in bags because they have nowhere else to turn. They leave with clean clothes and thankful hearts, Gray said. “I don’t know how many have left here in tears as they go out the door,” she said. “They can’t believe we’re doing this.”

One woman brought 13 bags of clothes and every piece of clothing was washed, dried and folded. Gray said they’ve had as many as 30 families of laundry waiting to be finished. “And that’s more than 30 loads of laundry,” she said. “Some families had two or three loads. We’ve done large, large, large amounts of clothes.”

The laundry team works tireless throughout the day and into the evening, Gray said, with 14 washers and dryers cleaning and tumbling clothes practically non-stop. It costs about $100 a day in fuel to keep everything running. They’re doing it not only to help the people of eastern Kentucky but to show the love of Christ. Gray, a veteran of 14 years with KYDR, plans on being there through the end of the month, if necessary.

After they get their clean clothes back in a neat and orderly fashion, she said someone walks with them one-on-one to their cars to speak with them and hopefully spark a gospel conversation. “That’s why we’re here,” she said. “It’s not just to wash clothes. They need to talk to someone, and our chaplains and other DR workers are there to counsel with them. They need time to talk, to get it out. It’s been such an emotional time for them. And if they don’t know Jesus, they need that more than anything else.”

Gray, who is from Benton in the western end of the state, commiserates with the difficulty they are experiencing. She said the December tornadoes went over Benton, but her home wasn’t damaged. But she saw how western Kentucky was devastated in December like the eastern Kentucky area was devastated about 10 days ago. It’s similar in a lot of ways, she said, with people having nowhere to turn.

“Some of the stories they tell you will yank your heart out,” Gray said. “Many said they lost everything but they didn’t lose their family and that was the most important thing. It’s all heartbreaking what they’re going through.”

The opportunity to hear their stories is important and cleaning their dirty clothes is one less obstacle. Gray said many of the clothes have mold and mildew already, but they use a high-powered shock treatment on them. She said they also clean out the shower units after each use with the same shock treatment.

Clean clothes and a shower can change the disposition of anyone, she said. The hope, though, is that it change hearts where it is needed, too.