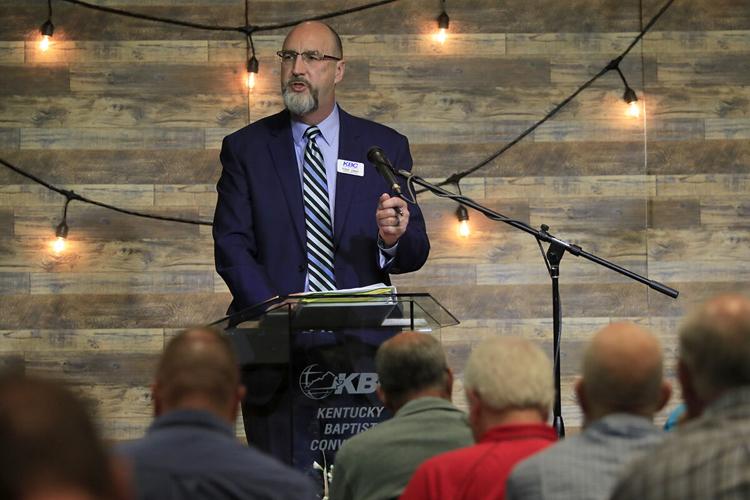 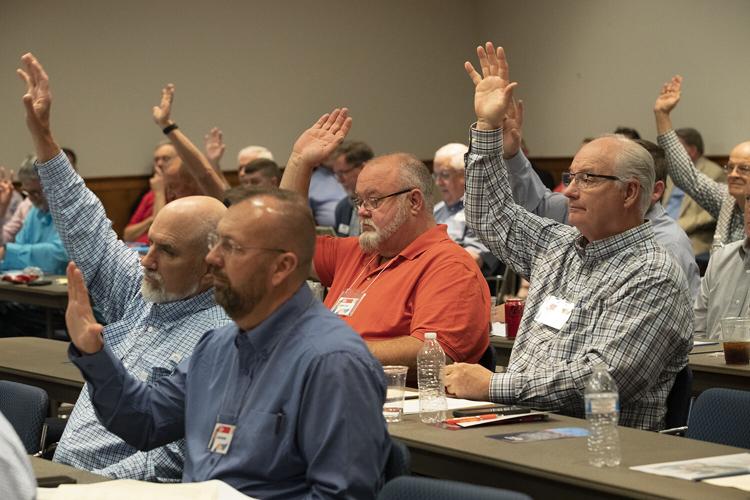 Mission board members of the Kentucky Baptist Convention met in Louisville on Monday, May 9, 2022, to hear ministry reports and vote on convention business. (Kentucky Today/Robin Corneet)

Mission board members of the Kentucky Baptist Convention met in Louisville on Monday, May 9, 2022, to hear ministry reports and vote on convention business. (Kentucky Today/Robin Corneet)

LOUISVILLE, Ky. (KT) – “It is good to be Kentucky Baptists,” said Todd Gray, executive director-treasurer of the Kentucky Baptist Convention as he discussed successes of the past six months at Monday’s May Mission Board meeting.

Gray pointed out that Cooperative Program (CP) giving remains strong while Kentucky Baptist leaders are working well together for the advancement of the gospel.

Gray pointed out that at this time last year Sunrise Children’s Services was in a battle with the state and “looking at a challenging future. Kentucky Baptists prayed hard, gave sacrificially and called the governor’s office, and today Sunrise is serving more than 800 children, operating in the black and expanding services across the state.”

He added that Sunrise “fundraising has been off the charts. Nobody likes to see an organization pushed around.”

• The Gospel to Every Home endeavor “has been a huge win for Kentucky Baptist churches and associations, with 95 percent of homes in the state adopted. “Salvations have been recorded and church members encouraged,” Gray said. He told of an experience by associational mission strategist Glen Stewart when he talked with an 8-year-old girl. She assured him she was saved because “she had read the Gospel of John and was saved, then she followed through with baptism.”

• Calling Out the Called, an initiative that began at last November’s Annual Meeting, is expected to be a focus for the next three to five years. A work group related to that initiative has been formed, started working and established five priorities. Gray pointed out the work of Jamie Reynolds, associational mission strategist for Three Forks Association, whose story of eight men completing ministerial training in that area was featured on Kentucky Today. He also asked that people set a daily smartphone alert to 10:02 reminding them to pray for laborers.

• “Church in the Search” resources are proving valuable to KBC churches, Gray noted, with new training and resources produced and provided to 105 churches. A ministry job board has launched.

• Reach 2022 Evangelism and Missions Conference was labeled a “top shelf event” with more than 600 people registered.

• A first-of-its-kind Cooperative Program Training Kit was produced and more than 1,100 kits distributed. Those have been used by pastors on Sunday and Wednesday nights, and feature a breakdown of how CP dollars are allocated.

• “One of our priorities has been to re-engage CP-disengaged churches,” Gray said. “That was enhanced by your hiring of Dr. Michael B Cabell, who was added to the team in January. Half of his time is spent focusing on these 600 churches.”

“I love serving you and being a Kentucky Baptist,” Cabell said. “We have learned we have 613 dis-engaged churches not actively giving to the Cooperative Program. Many have budgets of less than $50,000, and over half of these have not given to the CP in over a decade. These are churches that have systematically and purposefully decided to not engage in CP.

Cabell said the No. 1 factor for non-engaged CP churches is financial difficulties. Also, “nearly two out of five are being led by a non-SBC pastor — they are independent or Pentecostal.”

He cited lack of knowledge about CP and disenchantment with larger SBC issues as being contributing factors.

“It’s very promising that we can re-engage some of these churches. We will strive to re-engage them … we desire every church to be engaged in CP in fueling missions around the world.”

The seven priorities listed by Gray are …

• Every Church on Mission: “Kentucky Baptists are mission-minded people and we want to help them carry out the calling.” He said a statewide initiative will be led by the Missions Mobilization team, but all teams will be involved.

• Calling Out the Called Scholarship: “Every year KBC provides $60,000 in scholarships annually to students attending Clear Creek, The Southern Baptist Theological Seminary and Boyce College. “We want to rename the KBC scholarship and make it in-house, and we will raise the amount to $100,000 annually. He said Cabell and the Agencies and Institutions Committee will provide leadership in this effort.

• Sexual Abuse task force: Announced in November, “has met twice as a full group, more times than that as portions of the group, with the goal of helping Kentucky Baptist pastors, churches and ministry leaders prevent sexual abuse in churches, respond to allegations and instances of sexual abuse and care for survivors of sexual abuse.

“Most pastors don’t know what to do if an instance of sexual abuse comes to their attention. Our goal is to help you and AMS leaders know what to do.” The plan is to review KBC internal documents, train KBC staff, develop a handbook for churches and associations and train pastors, AMS and church leaders.”

• The Cooperative Program promotion strategy is labeled “Putting a Face on CP.” The priority of this goal is to develop and implement a convention-wide strategy to promote the Cooperative Program in Kentucky as “our primary tool for funding state, national and international ministry and mission work. Heading this project is a CP Promo taskforce. “People give to who they know and care about,” Gray said.

• Yes for Life campaign: Designed to mobilize Kentucky Baptists to vote “Yes” to Amendment 2 that will be on the November ballot. A “Yes” vote states there is no constitutional right to abortion in Kentucky’s constitution.

• Lostness in Kentucky is designed to increase awareness of the number of people in Kentucky who are lost. KBC Team Leaders Rob Patterson, Steve Rice and Eric Allen will lead this effort.

Matt Flanagan spoke to that effort. “We recognize and understand we are losing ground with the younger generation,” Flanagan said. “The numbers are alarming. For past 50 years there has been a decline of student baptisms in the SBC, and Kentucky has followed a similar trend. Last year 1,501 teens came to know Christ and were baptized, but that is less than one person per KBC church. The need is great. We want to help churches to work together to combat lostness in this generation.

“We want to raise awareness," he continued. “Significant spiritual truths about Gen Z are these — it’s the most unchurched generation in history of the nation, the most biblically illiterate generation we’ve had in our country, and have the largest percentage of lostness in our country."

He said the effort will engage pastors and other leaders to learn best practices of those who are seeing fruitful work with the younger generation. “We’ll do this through regional forums and hearing from panels of those who are effectively doing this work. We’ll do leader training — we want to develop an online module to teach helpful leadership principles to engage in lostness and consider how common experiences and challenges can be met.

“Finally, we want to celebrate. We believe the testimony of faithful churches engaging in this work will be inspirational. We want to tell great stories through Kentucky Today.”

Flanagan issued a challenge. “Pray for the salvation of teenagers in our state. Ask the Lord to put one teenager in your path who you want to share the gospel with.

Flanagan said the majority of churches in Kentucky rely on volunteer leaders with the younger generation. “We want to help churches, who rely on volunteers who lead ministry to students, to have what they need. Only 12-15 percent of our churches have paid student ministers.”