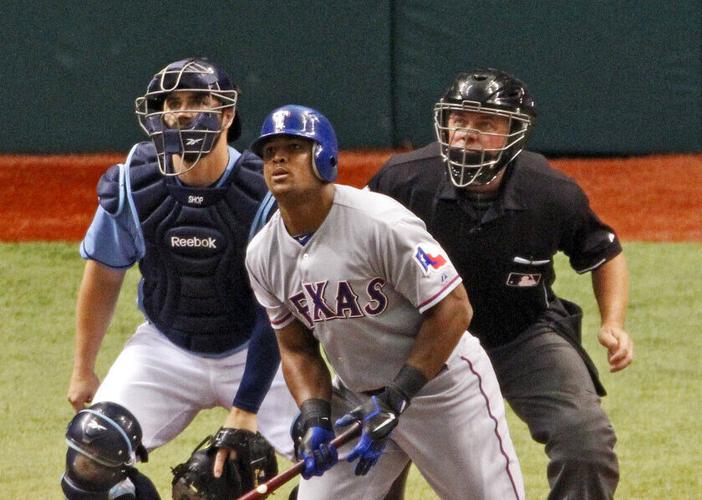 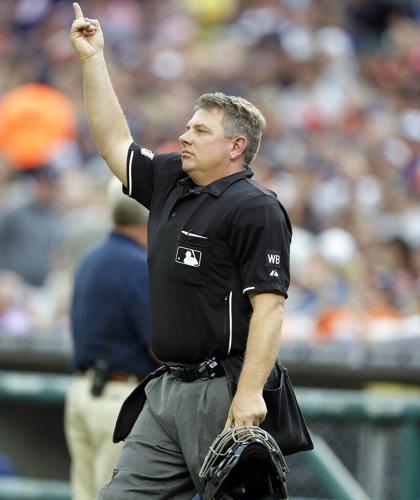 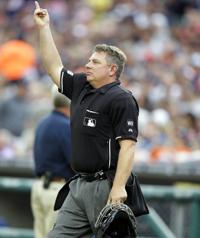 Homeplate umpire Greg Gibson signals a home run for Tampa Bay Rays' Matt Joyce after a review during the first inning of a baseball game against the Detroit Tigers in Detroit, Sunday, July 6, 2014. (AP Photo/Carlos Osorio)

His career is stuffed full of highlights, including being on the umpire crew for the 2011 World Series, calling balls and strikes for Randy Johnson’s perfect game in 2004 and then on the bases when Clayton Kershaw fired a no-hitter 10 years later in 2014.

Those are big baseball moments for No. 53, who recently turned 54 years old. No other umpire has ever worn No. 53 except for Gibby, as they called him.

Gibson said he was thankful for everything baseball gave him but it was time to walk away from a job that has given him life experiences he could never had imagined. “If God called me home right now, I’ve done a lot of living,” he said.

His career included being part of 11 Division Series umpiring teams, five League Championship Series and even a Game 7 as part of the 2011 World Series that the St. Louis Cardinals won against the Texas Rangers.

He also had one that nobody could match: “I had home plate on Sunday night on ESPN and (Albert) Pujols pitched. He’s part of the 700 home run club and I worked the plate for Albert Pujols pitching.”

It was his Pujols’ one and only mound appearance in a Hall of Fame career.

Gibson was a highly respected umpire who is walking away on his own terms and at the right time. He’s looking forward to more family time with wife Michelle and his three sons: Kyle, Cameron and Carter. He will also spend more time with his dad and mom, Acey and Joyce Gibson,

“My family put up with me being gone,” he said. “Michelle practically raised the boys by herself.” She will be retiring from the Boyd County school system next year, he said.

Don’t expect Gibson to be sitting in a rocking chair and remembering the good ‘ol days. He will be more involved than ever with an insurance coming that has been soaring since it started in 2019. He loves the business and will be putting that same effort into it that made him one of MLB’s elite umpires over the past 24 years.

Gibson said he never wanted to stay too long in umpiring and “be that guy where players are rolling their eyes when they see you coming out. I’ve seen that happen (to other umpires). I was getting to the point where it wasn’t fun.”

“When I got into umpiring, it was my passion. I always said I wanted to leave when they still thought I was good. Not great, but good,” he said.

Gibson said he also didn’t want to be the veteran who stood in the way of a young umpire ready to make the move to MLB. “A young man on my crew, Nick Marley, came up from Triple-A. Hopefully they hire him in the offseason. I remember being that young guy. It’s my time to get out of the way. It was the right time.”

Umpiring has taken a physical toll as well. He’s had multiple concussions from foul tips smacking off his facemask and head. Gibson said he thought his career was in jeopardy when he had four concussions in 2009. Three of the head blows came within 12 days, he said.

He missed the 2020 season after suffering an offseason knee injury and has missed games this season with long-term COVID issues.

“It’s been a great run,” said Gibson, who started his professional umpiring career in the Appalachian League in 1991 when he was 22 years old. He broke into MLB in 1999 and his first game was Cleveland-St. Louis in 1997. “I’m not sure my feet touched the ground when I went out,” he said. It took two more years before he became fulltime in the major leagues, following a tradition in the Ashland area that included Charlie Reliford and Terry Craft. Sam Holbrook, who is from Morehead, is still an active umpire. Reliford works with MLB umpires and is considered one of the best rules experts in the game.

When Gibson became an MLB umpire, every team didn’t have its own television network and every game wasn’t televised. Baseball fans could only catch the Braves (WTBS) and Cubs (WGN) on a regular basis. The radio was the biggest means of communication.

But year by year, technology soared and now every team is televised every game and national networks put it under a bigger spotlight. That meant more attention – and pressure – on umpires to never miss a call. Their accuracy rate remains remarkable on balls and strikes and safe or out.

“I told Michelle my goal this year was to not become a meme,” he said. “Who would have ever thought that?”

The physical and mental fatigue of being a MLB umpire can take a toll, he said, which is another reason he’s glad to walk away from it even though he could have experienced it longer.

A man of faith, Gibson said he understands know how God was working about eight years ago preparing him for a career change.

“I was disappointed with some things that were happening with my (baseball) career. A few things happened that I didn’t understand and didn’t know why. I was mad. But God was opening up a door for me with insurance. I am so thankful. Even when I was mad, I didn’t even realize it until 2021. God was preparing me then for now. It’s what makes me more happy than anything. I’d rather be in God’s will than work four or five World Series. At the end of the day, God only gives you one shot. If you’re going to say Jesus take the wheel, mean it.”

Gibson said he has worked with a lot of umpires who have passed away. “They don’t teach a man how to retire,” he said.

Even though he’s been on the field for some of baseball’s biggest moments, the most memorable moments were when he looked up in the stands and saw family – his mom and dad, his wife and sons. “That’s what was always the most important moment,” he said.

He called behind the plate on Mother’s Day in Cincinnati this season and before the game had his family on the field with him for some photographs. Gibson, who hadn’t contemplated retirement, said he didn’t know why but something told him to do it.

“For whatever reason, I got them all downstairs and went out on the field and take a ton of pictures,” he said. “Now I know why.”